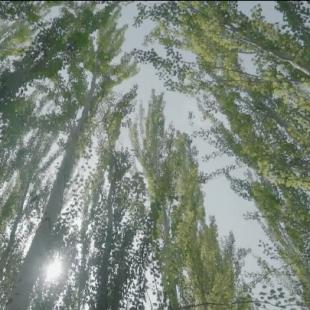 Over 30 years ago, a war against desertification was waged silently in Kekeya, a little-known place in northwest China's Xinjiang Uygur autonomous region. But the influence was earth-shattering. Locals won the battle and passed on the spirit of fighting mother nature's ills to those who will continue striving for a better environment.

Located at the northwestern edge of the Taklimakan, the largest desert in China, Kekeya was once notorious for its erratic weather and constant sand storms.

An afforestation project to prevent the desert from expanding and to reduce the impacts of sand and dust storms on nearby residents was launched in Kekeya in 1986 and completed in 2015.

Over the past 30 years, a great "green wall" stretching around 77,000 hectares has been gradually erected between the desert and towns.

The remarkable achievement of Kekeya, located in the Aksu Prefecture, has inspired more people to participate in ecological campaigns, which are already underway and expected to transform the desert into an oasis.