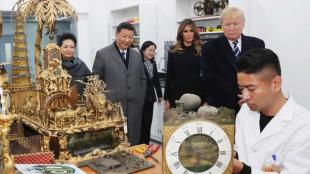 Chinese President Xi Jinping and his US counterpart Donald Trump watched craftsmen repairing relics as they toured the Conservation Scientific Laboratory of the Forbidden City on Wednesday, together with the first ladies, Madame Peng Liyuan and the First Lady Melania Trump.

During their tour of the Conservation Scientific Laboratory, also known as "Relic Hospital", Xi Jinping and Peng Liyuan invited Trump and his wife to see the work of framing, a key part of Chinese painting and calligraphy.