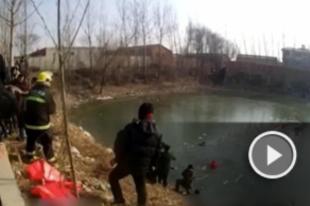 A 55-year-old villager jumped into a pool in North China's Hebei province on Sunday and dragged out two children who fell into the water when playing.

Xing Honglan, who lives in Houzhangba village of Linxi county in Xingtai, was driving his car on a village road when he saw two children about 10 years old struggling in a pool.

Using his hands he cracked the surface of the pool, which was frozen as the outdoor temperature was - 3 C and tried his best to swim toward the center of the pool where the children had fallen into water.

"The center of the pool is about three meters deep and I had to swim as fast as I could," Xing said, adding that the icy water left him freezing.

According to Xing, other villagers who came upon the scene immediately called firefighters and doctors.

Together, Xing and three firefighters, who brought ropes and life jackets, pulled the children from the pool and took them to the village road.

Other villagers and doctors who responded to emergency calls joined the effort to try and save the children, but one child, a boy, died from drowning in the cold water.

The tragedy drew an overwhelming sense of pity for the boy and compliments for Xing's heroism on social media in Hebei.

"Thanks to his quick response, at least one of them is alive," said a microblog user named Zhaoyu.