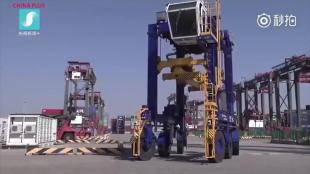 A Chinese-made self-driving container straddle carrier, said to be the first of its kind in the world, is now undergoing testing at a port in Shanghai, reports China Central Television.

A container straddle carrier is a freight carrying vehicle that carries its load underneath. It's used mostly in terminal ports for stacking and moving ISO standard containers.

The self-driving container straddle carrier being tested in Shanghai has been jointly developed by Shanghai Zhenhua Heavy Industry and Westwell Lab.

Technician Zhang Bo says the self-driving straddle carrier is equipped with six cameras and millimeter-wave radar which act as the "eyes" of the machine.

"The automated straddle carrier is safer, and can operate 24 hours each day, and increases the operation efficiency of ports by 50 percent," said Zhang.

Shanghai Zhenhua Heavy Industry hopes to have the new self-driving straddle carrier in operation by June. The company hopes to have a full fleet operational by the end of this year.